Bravo 25: Your Therapist Will See You Now ☼ ☼ ☼ 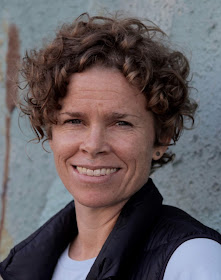 Bravo is right. Eliza Gibson's solo show "Bravo 25: Your Therapist Will See You Now" is intelligent, funny and fascinating. Gibson plays six different patients who have come together for a group therapy session. The session is led by "Amber," a developing Artificial Intelligence avatar who is being programmed to understand human problems.

The problem is, Amber is a machine so she has no feelings. However, she is a quick study. As Tony, Cheryl, Victoria, Jeremy, Marsha and Little Bit explain the difficulties they have been having in their lives with boyfriends, girlfriends, jobs, exes and children, Amber begins to absorb their pain. She even learns how to enjoy Little Bit's favorite jelly donuts.

The show takes a turn at the end which robots in the audience will probably appreciate, but for the rest of us is probably unnecessary. As a result, Bravo 25 runs a little long. But we never lose interest. 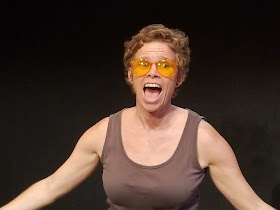 It's hard to say if we liked Gibson, the actor any more than Gibson, the writer. She runs on human warp speed, as she changes characters seemingly without drawing a breath. As a physical comic she makes most of her patients instantly recognizable, especially the lovely Marsha, the heartbroken Tony and the downtrodden Little Bit. And as a writer, she gives us a story which commands that we pay attention as we discover what we knew all along: that people need each other more than they ever realize.

A special thanks to comedian Maureen Langan, who opened the show and tossed in some memorable lines, including, when talking about her age: "I'm post-period pre-death." 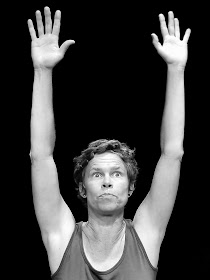 The avatars and the humans at The San Francisco Theater Blog Awards Division agree: this show is a must-see. We love Eliza Gibson as a writer and performer and wouldn't mind calling her when we need a clinical social worker, the work she does when she isn't wowing us on stage.