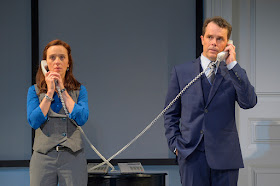 "Oslo" won a Tony for Best Play of 2017. Before the curtain went up, Marin Theater Company Artistic Director Jasson Minadakis announced they had sold a record number of seats-before-opening. The show is certain to be extended. It was a hit in New York and it will be a hit in Marin. 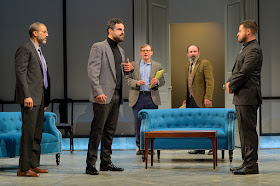 So never mind about a story that plods, with little character movement or growth, a bunch of people whose names have to be narrated to us as if we were having trouble reading their name tags and a history with whose sad ending we are already far too familiar. In our own present world of deceit posing as truth where good people spend too much time trying to force bad people to act with decency, "Oslo" does little to make us believe in the ultimate triumph of mankind.

We liked Mark Anderson Phillips very much as the well-meaning Terje. His wife Mona (Erica Sullivan) was also good, but she had the unfortunate task of continually leaving character to walk to the front of the stage and introduce new participants (whispered to audience: "This is Yohan Jorgen Holst..."). She, like the rest of the Norwegians, are said to be troubled by losing their jobs if word should leak out of their clandestine mission, but nothing ever really happens to anyone. 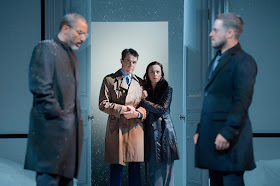 The Palestinians (Ashkon Dvaran and J Paul Nicholas) are appropriately hostile but able to be gotten drunk enough to tell jokes, while the Israelis are equally inhospitable, especially the higher-level diplomats like Joel Singer (Peter James Meyers) and Uri Savir (Paris Hunter Paul). You wouldn't invite either one of these guys to hula hoop at your kid's bar-mitzvah. Perfect for a peace treaty.

We sat on the right in the second row. Much of the night the actors had their backs turned to us and we had no idea what they were saying. It may be that the good reviews, and there are many already, will come from the left. 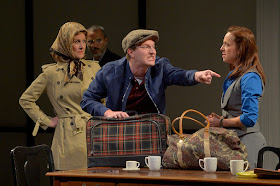 The San Francisco Theater Blog Awards Division grants "Oslo" Three Stars. Perhaps it was Opening Night jitters. Perhaps the cast hasn't learned its lines yet (there were flubs and not a few). "Oslo" won a major-league Tony. Somebody has to know something we have not seen on stage yet. 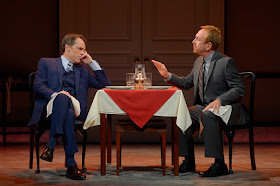