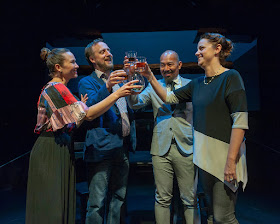 Christopher Chen's brand new "You Mean to Do Me Harm" has many pluses and only one minus. Especially inventive staging makes us excited to see where the cast of four might go next. The set,  which looks like a fancy U-shaped bar on an upscale spaceship, allows each character to make unexpected entrances. Director Bill English uses these entrances to blend one character's story with another's. It is very effective. In this World Premiere, Chen's story makes us examine our own motivations as we try to make sense out of the ways we interact with the ones we love. 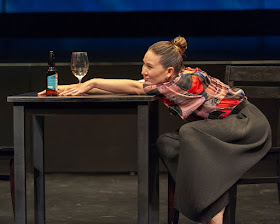 Lindsey (Katie Rubin) and her husband Daniel (Jomar Tagatac) are celebrating with Ben (Cassidy Brown) and Samantha (Charisse Loriaux). Ben has been hired by Daniel for an un-named job at Daniel's tech company. But the night starts out badly and goes downhill from there. A previous relationship between Lindsey and Ben, as well as Daniel and Samantha's mutual attraction to one another threaten to sour not only this social event but Ben's job as well. 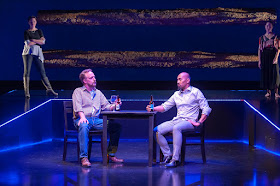 There is more here too: race. Daniel and Samantha are Chinese-American and their expectations color their reality. Chen takes us onto alternate channels where all four people imagine slights that maybe were real and maybe weren't, and things that were said but not meant like they sounded. What is maybe isn't and what happened maybe didn't. It's confusing but for the most part we follow along.

There is a problem, however, and it's personal. These are not nice people. Ben, especially, is played with such annoying and whining dweebiness that we cannot root for him. His ex is cold, his to-be-boss is paranoid and reveals nothing. And then there is Samantha, the one character who seems to see through everyone else and will use it to her advantage. The author's message appears to be that no one can be trusted to rise very far beyond cultural expectations. Without revealing the ending, we are left to wonder whether any of these people are capable of making a difference in the world. 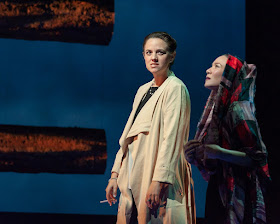 
The reviewers at San Francisco Theater Blog loved looking at this show. English's direction made scenes sizzle into each other. It was enjoyable to try and piece out what was reality and what was imagination. But all of this is brain. We will like "You Mean to Do Me Harm" better when we can bring more of our heart on board. 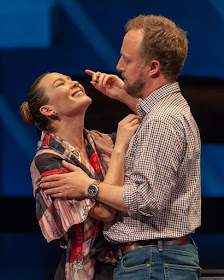